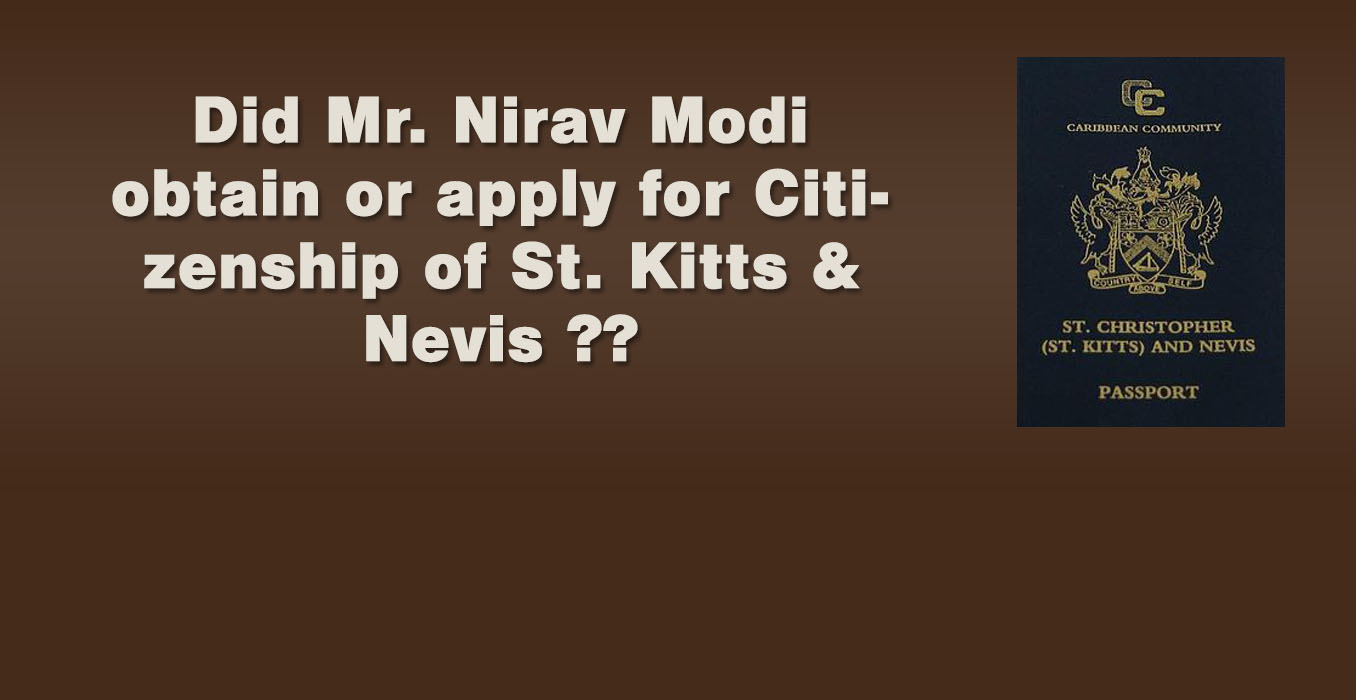 Did Mr. Nirav Modi obtain or apply for Citizenship of St. Kitts & Nevis – A Caribbean country?

How true are these reports?

For starters, let us understand some basics. There are five Caribbean countries which offer residency and citizenship of their countries (and a 2nd passport) to High Net Worth individuals who voluntarily make an investment in luxury real estate or donate a designated amount to the national development fund. This amount generally ranges from $200,000 to $400,000 US.

The primary reason why HNIs are willing to part with their fortune to obtain a passport of the aforementioned countries is because these passports grant them the liberty to travel to more than 130 countries around the globe without the hassle of obtaining a visa. This is due to the fact that many western countries have diplomatic treaties with these island nations that allow their citizens to travel visa-free.

However, just investing the required amount of money does not guarantee citizenship of these countries. Before residency and citizenship is granted or a passport is issued to the investor, a thorough and detailed background and security check is conducted by the government department in-charge of approving R&C applications. If the applicant has any criminal record or has been involved in dubious transactions or dealings in his/her home country, the application is instantly rejected.

A few days back I was speaking at two conferences on the subject of Residency & Citizenship by Investment, one in Dubai and another one in Mumbai. During this time I had the opportunity to meet some senior government officials of these island countries, including St. Kitts and Nevis.

These officials confirmed to me that Mr. Nirav Modi has not applied to their respective countries for citizenship nor has he been issued a passport of these countries. In fact, the government of St. Kitts and Nevis has issued an official press note denying the sensational claims made by the Indian media who has repeatedly quoted ‘a reliable source from the diamond industry’ as their informant.

It must be understood that is very important for these island nations to maintain the integrity and transparency of their citizenship programs as it brings valuable investment for their nations’ development.

Any country which opens its doors to potential investors and immigrants has a strict background check policy in effect ensuring that they do not harbor or give refuge to fraudsters, defaulters, terrorists and criminals from other countries. After all it is imperative that the reputation, integrity and economic future of their countries is protected.