Common mistakes made by parents and students while planning for study abroad!

Are you interested in planning for your child’s foreign education and settlement in a foreign country? 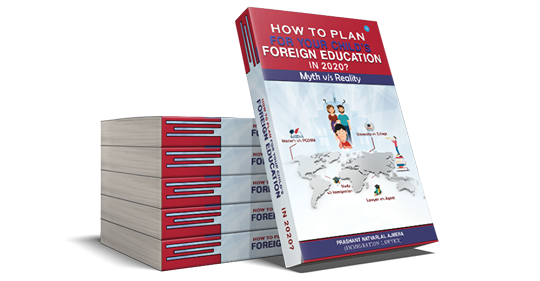 Who is Prashant Ajmera?

Prashant Ajmera is a reputed Indian lawyer, NRI, and Canadian citizen since 1997 with more than twenty–five years of experience in the field of cross-border personal law and global investment advisory. He has assisted numerous HNIs and UHNIs in planning their finances and advised them in planning their children’s foreign education in the most economical manner.

Mr. Ajmera is a member of the International Bar Association (IBA) and has addressed the IBA Annual Conference as a speaker on two occasions (Cancun-2001 & Durban-2002).

He is also a member of many chambers of commerce and charitable organizations.

To consult Prashant Ajmera (Lawyer, Author & Founder)  for planning your child’s foreign education either in person or via Zoom video conference click here

Indian parents wait till standard 12 or bachelor degree results to take action for a child’s foreign education. It could be too late and you may be running out of options.

Pursuant to the economic liberalization in India, wealth creation has reached unprecedented heights. From the time of independence, the Indian economic era can be divided into three main periods:

The first period from 1947 to 1993 can be described as pre-liberalized – a time when pre-liberalisation of the economic policies were in place in India.

The second period from 1993 to 2007 can be regarded as the start of economic liberalization– a time when inbound investments began in earnest in India.

The third period from 2007 to present can be described as optimum economic liberalization – a time when inbound and outbound investments to and from India were allowed.

Before the 1993 pre-economic liberalisation era, most Indians aspired to just own a decent house, a vehicle (two wheelers were good enough), good education for their children in local schools and enjoying vacations within the country. However, in the post economic liberalisation era, most Indians not only want a house with four walls but yearn for a lavishly furnished, luxurious home. Owning at least two cars, a holiday home or farm house outside the city and vacationing abroad have become must-haves for well-to-do Indian families today.

The wave of economic liberalization seen the past few years has increased the number of HNIs in India and wealth generation is at its peak. Life styles, standard of living, travel, education, weddings, savings, retirement and many other important aspects of life have changed post 2007.

Have a look at the following figures:

Today, Indian HNIs own a second home outside India, their children are studying in foreign universities and they spend at least one vacation abroad per year, thanks to the booming economy and increased spending power.

According to the data received from RBI the Indian HNI remittance has increased from US$ 440 million in 2007-08 to US$ 13.5 billion in 2017-18 under the LRS. This exponential increase is due to outbound investment and remittance post 2007. Now Indian HNIs are travelling abroad more frequently, for work as well as pleasure. Destination weddings in exotic international locations and sending their children out of India for undergraduate and graduate studies is also making a sizeable contribution towards outbound investment.

According to RBI, the top spending for HNIs was on their children’s education – around US$ 4 billion, followed by foreign travel and gifts to family.

As the data shows, spending for children’s education abroad is on top of the list for Indian HNIs. Today not only HNIs but even middle class parents aspire to send their children abroad to study. Several surveys show that Asian parents give top priority to their children’s education and are particularly keen that they study abroad. This is probably due to the fact that the approach and attitude towards education in Western countries is very different compared to that in Asian countries.

However, the past migration history of India and the affluence of the Indian diaspora in foreign countries prompts most Indians parents to presume that if their child gets a foreign education, he/she will be able to settle in that country permanently. They equate studying abroad with settling abroad. They feel that once their child goes abroad, they will be able to make a good life for themselves and settle comfortably.

In order to secure their child’s future in a foreign country, Indian parents spend obscene amounts of money or take loans that often take a lifetime to pay and somehow send their children abroad to study. Their hope is that their child will obtain residency, land up with a lucrative job and have a successful career.

We must not forget that just like India, there are many countries around the world who send their youth to study in countries such as USA, Canada, Australia, UK and New Zealand.

This has increased the number of foreign students applying for immigration in the aforementioned countries. Hence the queue and waiting period for obtaining immigration is getting longer and longer.

Let us take an example of an Indian student studying in USA. If this student started studying in the Master’s program in the year 2002, he is likely to have completed it by 2004. Like most students, he would have converted his status from F1 student visa to H1B work permit visa. He would have worked for six years on this visa assuming that the company he worked for continued to hire his services. Hence until 2010 he would be working on a H1B visa.

Let us assume that this student applied for a Green Card in 2010 under one for the following categories – EB1, EB2 and EB3 and received approval for his I-140 petition. As each of the categories has a quota of 40,000 Green Cards per year, and as the number of foreign students applying for a Green Card in these categories is very high, it takes several years to receive this much coveted card.

There are many Indian students in USA who were trying to obtain a Green Card since the last 12-15 years after completing their studies. When their wealthy Indian parents realized that their children cannot obtain residency after the study program, they tried to intervene by investing money on behalf of the children in programs such as EB-5 Investor visa of USA to secure a Green Card for their child.

Other popular destinations for study abroad are Canada, Australia, New Zealand and the UK. Thanks to thousands of student visa consultants and agents, Canada has the highest number of Indian international students. Unfortunately due to bad advice given by local agents, who are motivated by the hefty commissions they receive from foreign education institutes, a good number of students receive a shock of their life when they realize that the course they have been enrolled into is not a Master’s program but a college diploma or certificate course. Also, the institution they are going to study in is not a recognized university but a community college. There are innumerable horror stories faced by parents and their children because of their desperation to go abroad.

Most Indian parents, whose children are ready to study abroad, fail to realize that circumstances that existed a few years ago to settle abroad are not applicable in 2020. Immigration laws and regulations change from time to time and from country to country. Unless parents plan early, sending their children abroad to study will only result in spending exorbitant amounts of money without any net gain, which is permanent settlement in that country.

There are also good number of Indian students who had gone abroad to study but were forced to return back to India because they could not get employment related to their education nor could obtain residency/permanent immigration of the country where they studied. This has led to frustration, disappointment and careers of many bright students being destroyed due to short-sightedness and lack of knowledge.

When our law firm is approached by such parents, we cannot find a viable solution for them in many cases as the child who has gone abroad for study is way past the legal age to be included in an immigration application with his/her parents under the investor class. Parents and children undertake thorough research and seek legal advice from an experienced immigration lawyer to explore the possibility of immigration after study before going abroad.

Though a new concept for Indian HNIs, their counterparts in other countries such as China, Taiwan and Korea have resorted to obtaining residency and citizenship by the investment of various countries round the world to secure their children’s education in foreign jurisdictions, giving their children a jump start in their career when they finish their education.

The most important advantage of obtaining residency and citizenship by investment is that the investor’s children can enjoy reduced tuition fees at the majority of top universities. Tuition fees for permanent residents and citizens are significantly lower, reduced by almost 60%-80%, in most foreign universities as compared to those paid by international students.

In many cases, the amount to be invested by an investor in a particular country is just a little higher than the tuition fees he/she would pay in international student fees, especially if the investor has two or more children.

Making investments in risk-free but unconventional products in many countries of the world can help wealthy Indians to secure the foreign education and career of their children. There are excellent opportunities available for investing in countries such as USA, Canada, UK, some European countries and the Caribbean islands which guarantee subsidized education for children of investors.

In keeping with the changing trends, Indian parents can invest for a second passport or residency of a foreign country to ensure theirs and their children’s future before it’s too late.

Countries that offer Residency and/or Citizenship by Investment: 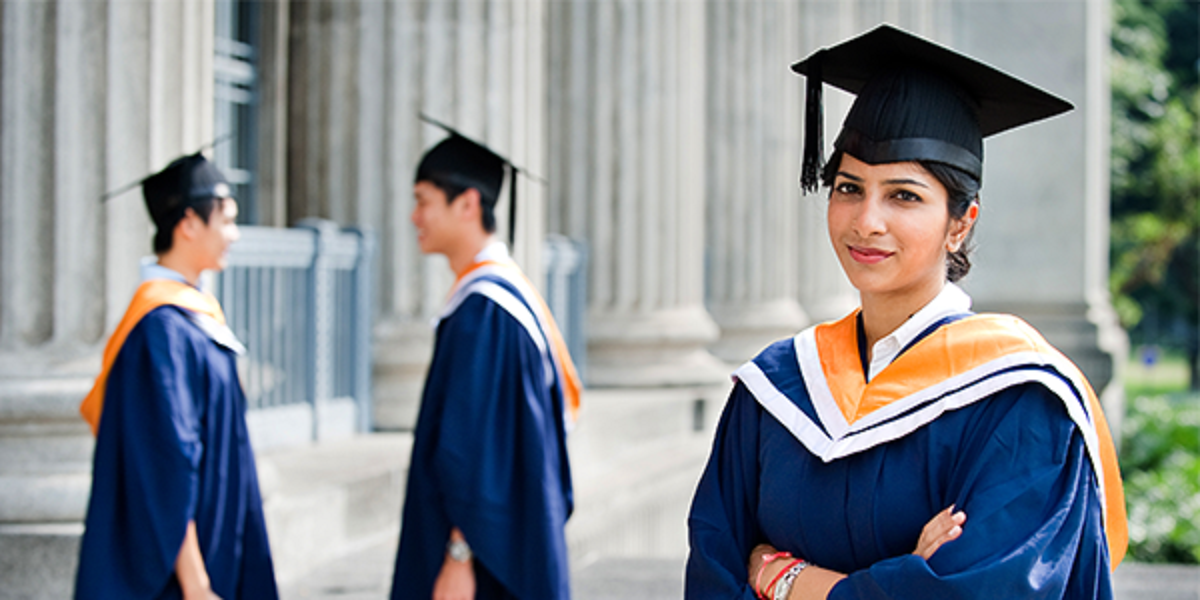 Common mistakes made by parents and students while planning for study abroad!

Are you interested in planning for your child’s foreign education and settlement in a foreign country?

Who is Prashant Ajmera?

Prashant Ajmera is a reputed Indian lawyer, NRI, and Canadian citizen since 1997 with more than twenty–five years of experience in the field of cross-border personal law and global investment advisory. He has assisted numerous HNIs and UHNIs in planning their finances and advised them in planning their children’s foreign education in the most economical manner.

Mr. Ajmera is a member of the International Bar Association (IBA) and has addressed the IBA Annual Conference as a speaker on two occasions (Cancun-2001 & Durban-2002).

He is also a member of many chambers of commerce and charitable organizations.

To consult Prashant Ajmera (Lawyer, Author & Founder)  for planning your child’s foreign education either in person or via Zoom video conference click here